Why I would not buy a NETGEAR ReadyNAS

Recently I had the fortune to test a NETGEAR ReadyNAS. Now this review is rather harsh toward the ReadyNAS, so I say "fortunate" because I most likely would have not been exposed to this hardware in any other context, and within minutes of beginning work on managing these devices it was clear to me that I would not use my own money to buy one. I'll detail why in just a moment.

For those not familiar with Network Attached Storage (NAS), a quick explanation would be that a NAS is like a hard disk that connects to a network. In addition to simple storage, a network-attached disk like this usually offers some other software features like all-inclusive backup, remote access through VPN, and media sharing. In summary, a NAS is a storage appliance; a place to store data that is plug and play.

This disappointing design and functionality of the ReadyNAS made me chuckle a bit, because I've been regularly called by NETGEAR marketers about selling ReadyNAS as part of my solution portfolio. I've explained to them that I am a QNAP and Synology guy, but they persist, attempting to answer my questions and assure me that their product does everything the QNAP does, and they act interested in my suggestions to improve the NETGEAR line. I don't know, from my perspective, the ReadyNAS is a solution beyond hope, and I feel that NETGEAR should just drop the product line. They are not a storage company.

My exposure comes from a job site where I was responsible for integrating a Philips Ultrasound system called Xcelera. As part of this solution, Philips uses 2 stock ReadyNAS Pro 4 to store and archive patient studies, which is basically all of the Ultrasound and analysis data that is generated.

As a sysadmin I am tasked with checking that studies are appearing on the NAS and subsequently copied to a second NAS.

Firstly, the firmware for the ReadyNAS is called RAIDar. It has a web interface which I found to be quite poor functionally when compared to current firmwares from QNAP and Synology. The design and interactivity of I would estimate to be somewhere in the 2003 era, even though the firmware is dated 2012. While I may not be a fan of the "Desktop in your browser" mentality of the Synology and QNAP firmwares, at least they are featureful, perform well, are easy to use, and interactive in their feedback.

No Link to Admin Mode

Also, the first thing you do when you get to the RAIDar login page is realize that even if you log in as admin, there is nothing to configure! It's not readily apparent that you must use a separate URL for admin, otherwise from the base URL you are directed to a simple file manager page. There should be a link from the file management interface to the admin area.

Since the file manager was one of the first things I saw in RAIDar, here's what it looks like: 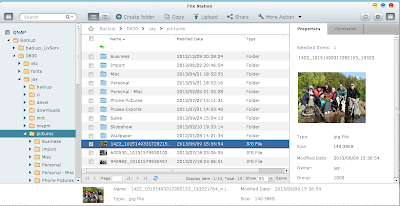 Creating shares is done through this form on the ReadyNAS. 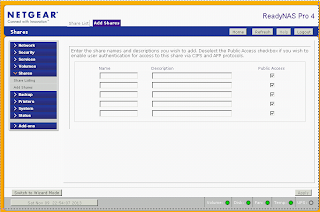 There is nothing dynamic about this page unfortunately. But I can say that the bulk-operations aspect is somewhat appealing, on the QNAP you must go through 7 steps of a wizard to create a single share, but at least on the QNAP you can assign permissions on a share during creation. On the ReadyNAS, you must first create a share, then switch to manage permissions.

In the process of integrating the ReadyNAS Pro 4 into my auditing and logging framework, I quickly realized that remote logging is not supported. This leads me to conclude that the ReadyNAS and RAIDar are not auditable and should not be used in secure environments. This seems to be ignored in practice, as in this case the device is being used in a medical context. I suspect anyone using ReadyNAS at a PCI-DSS or HIPAA compliant site is ignoring this major shortcoming and possibly not being forthcoming with their suppliers, managers, and customers.

The interesting thing is that NETGEAR has shipped syslogd, which can send logs to a central logging host, however, you must log into the NAS via SSH (and possibly get denied future support) to get it to work!

The ReadyNAS forum has a particular thread started in 2008 where a user requests syslog functionality. It's 2013 as of this writing and it still has not been implemented.

In contrast, the QNAP can both log to remote hosts and itself act as a syslog server, and even send email alerts on syslog events, all without touching a config file! Very slick. 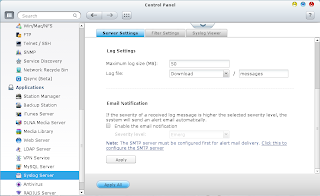 The market for add-ons on the ReadyNAS is relatively poor. In addition, I could not get the market listing to load on my ReadyNAS, I needed to download packages manually from NETGEAR's website.

In contrast, what QNAP has done is taken great Open Source projects and ported them to work on the Turbo NAS series. In fact the newest Turbo NASes include HDMI output and QNAP went to lengths to port XBMC, a best-of-breed media center package, to the QNAP NAS, rather than doing something silly like writing their own solution. The included apps on QNAP are also quite nice, like OpenVPN, MySQL, ClamAV, and Photo, Video, and Music apps that let you access content through a web browser without the complexities of VPN.

The QNAP forums and QNAP wiki are also much more active and complete, respectively, than the NETGEAR ones.

This section of the post is relevant mostly to consumers and prosumers, as remote access to a NAS in a corporate environment is not a feature most companies are looking for.

However, I think that an active set of mobile apps shows a company's commitment to current technologies and the competency of their development team. 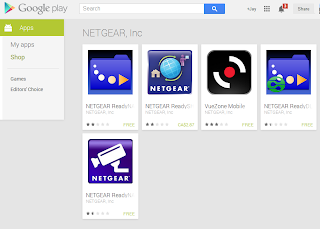 Here is the NETGEAR app list for Android. Very poor reviews! The icons don't even match. It seems either the apps don't work, or people are having trouble using them. 2-star averages. 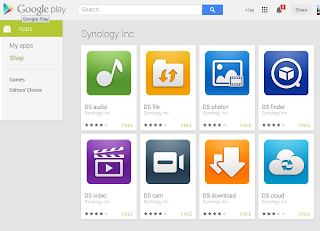 And here is a list for Synology. At least all of their icons are consistent looking. There are a lot of apps! Generally 4-star reviews. 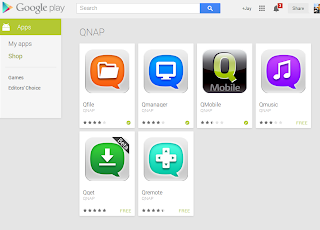 And here is QNAP. The reviews are generally favorable, and most icons are consistent. 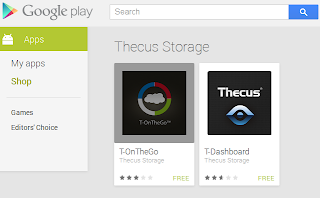 And Thecus. Not many apps, but maybe features are consolidated in each app.

In short, my experiences with NETGEAR have shown them to be a lackluster company when it comes to quality control and feature requests. They do seem to fix their bugs.

My experience with NETGEAR support on a VPN firewall I have from them also convinced me that NETGEAR is interested in selling hardware, but not interested in supporting it.

I would not recommend NETGEAR ReadyNAS, or their other products to any of my clients, save for network switches or any of their other products that do not have complex firmware or functionality. As far as I'm concerned, NETGEAR is a simple network gear company that excels only at creating "dumb" devices. They should  stick to their niche.

If you are looking for an extensible, feature-rich, easy-to-use NAS, with a great support community, and enterprisey features, look elsewhere.